‘Emerging Benefits’ Is The Next Workplace Trend

Workers say stress over their personal finances hampers their productivity on the job. Employers say they are challenged with attracting and retaining workers.

Both groups are looking to a trend in voluntary benefits as a way to help them overcome the challenges they face as the world of work continues to evolve.

MetLife’s 17th annual U.S. Employee Benefit Trends Study showed a greater interest in workplace benefits that go beyond the traditional medical, dental and vision insurance. These newer benefits are described as “emerging benefits.” They include everything from help with paying student debt to subsidies for egg freezing or gender reassignment support to financial counseling. Fifty-eight percent of workers said having nontraditional benefits would reduce their stress.

“It used to be that employers told their workers, ‘Here are my benefits; here’s what I pay for, here’s what you pay for,’” Todd Katz, MetLife executive vice president-group benefits, told InsuranceNewsNet. “But now, employees are saying, ‘We’re all different.’ You have multiple generations in the workforce, and even within generations there are different views of what’s important.

“So employers have said, ‘I get that. The best way for me to deal with that is to give my employees choice.” 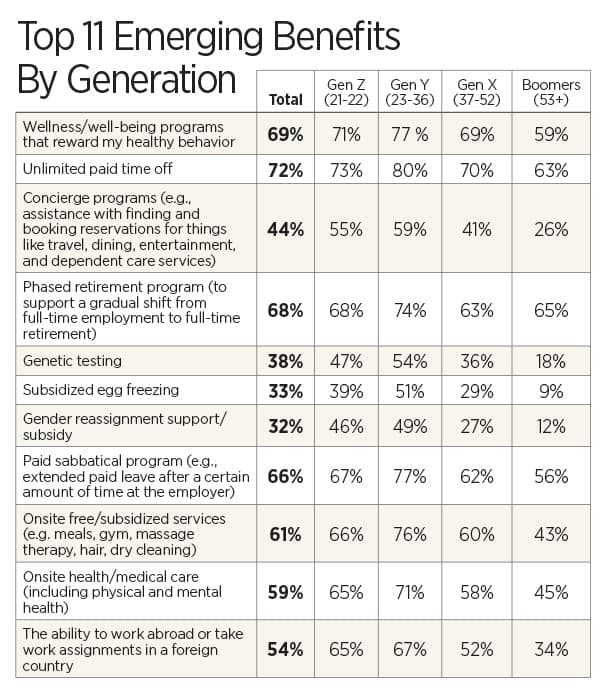 Choice, Katz said, is not only giving workers an option between Medical Plan A and Medical Plan B. It’s coming up with an array of benefits — some employer-paid and some voluntary — that give workers the opportunity to select what fits them best. It also gives an employer the ability to differentiate themselves from others in the marketplace by providing a unique set of benefits.

Despite the interest in emerging benefits, however, traditional benefits scored high among the workers MetLife surveyed. Medical insurance was the top-rated employee benefit, with 82 percent of workers in all age groups and 89 percent of baby boomer workers saying it was their biggest must-have benefit.

The MetLife study revealed workers are experiencing high levels of financial stress, and much of that stress stems from worries about their future retirement. Three of workers’ top five financial concerns relate to retirement worries.

Being able to afford the cost of health care in retirement was the top financial concern mentioned by workers in the survey, with 72 percent rating this as their No. 1 concern. The remaining top five financial worries included outliving retirement savings (68 percent), having money to pay bills if someone loses their job (67 percent), affording out-of-pocket medical costs (67 percent) and the ability to rely on Social Security and Medicare in retirement (66 percent).

The survey showed “a big push around things that are stress reducers,” Katz said. “Financial wellness is becoming a big deal for workers. We’re also seeing a large amount of the workforce dealing with student loan debt. They want their employers to help them come up with a way to be more efficient around their student loan debt.”

Workers are not the only group taking a different look at their benefits. Employers’ view of benefits also has changed in the nearly two decades since the survey began.

“In the early years of this survey, employers’ top goal for benefits was centered on cost savings and cost-effectiveness,” Katz said. “They are still concerned about that today, but we are seeing the emerging goal of using benefits for employee attraction and retention, and we are seeing a trend toward using benefits for more worker engagement and productivity.”

With unemployment at record lows, employers are challenged with attracting and retaining workers. That challenge is reflected in the most recent MetLife survey, with three in four employers saying that having a company-sponsored retirement plan increases worker loyalty and 43 percent of employers saying a comprehensive benefits program leads to greater worker retention.

Employers are not only concerned about attracting and retaining employees, but more than one third said they predict a knowledge drain in their workplace as a wave of older, experienced workers retire.

“Benefits are becoming more strategic as a means for employers to accomplish their goals by motivating employees, engaging employees and reducing employee stress,” Katz said. “Those are the themes that we have seen emerging from this survey in recent years.”

What’s A Benefits Broker To Do?

Choice. “Give employees the opportunity to personalize benefits to meet their needs, which means offering a broader choice of voluntary benefits,” he said.

Communication. “Make sure you have a good strategy to help people understand their needs and understand what you’re offering and how that intersects with their needs.”

Convenience. “Make it easy for workers to enroll in or elect benefits that they determine they want.”

“If you do those three things, employees will make the decisions that are in their best interest,” he said. “Ultimately, workers will feel less stress because they bought the right stuff and they’re protecting themselves. And it will lead to greater loyalty to their employer.”

5 Questions That Unlock Your Clients’ Values

Protect Your Legacy With Succession Plans