The good news is that corporate executives are not as worried about the COVID-19 pandemic as they have been the past few years, but the bad news is they are more worried about world splitting at the seams, according to a McKinsey survey.

A clear majority (76%) of the 785 executives surveyed said “geopolitical instability and/or conflict” was the top risk to economic growth globally and 57% said the same was true in their own country, according to the quarterly economic conditions outlook survey that McKinsey conducted four days after the invasion started.

The pandemic dropped from 57% as the top risk in the previous survey to 12% in the current one. After two years in the top risk slot, the pandemic was pushed down by geopolitics, energy prices and inflation. 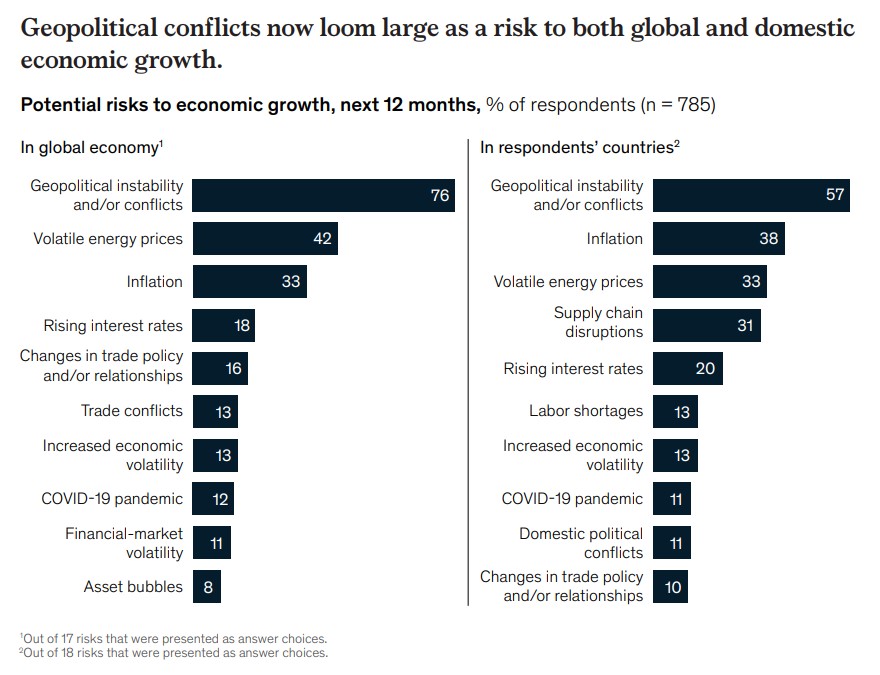 Even with some indications of economic improvement in the United States, such as job growth, the bloom is fading a bit for executives.

“Overall sentiment about the economy remains largely positive, but it continues to trend downward. For the third quarter in a row, respondents are less likely than in the previous one to report that economic conditions in their respective countries and across the globe are improving,” according to the report. “The near-term economic outlook is especially gloomy among respondents in developed economies, whose views are increasingly downbeat compared with their emerging-economy peers.”

Half of the executives (49%) said they thought economic conditions were better globally and 59% thought the same for their own country. But that number drops for the outlook over the next six months, with 43% thinking positively and 40% negatively.

Another rising concern was interest rates, making it into the top five risks to near-term growth, according to the report, which said the share of respondents citing the risk had doubled over the quarter.

The latest indicators from the Bureau of Economic Analysis also reflected the divided outlook.

Gross domestic product increased a healthy 6.9% in the fourth quarter of 2021.

Finance and insurance were main contributors to the increase nationally and was the leading contributor in 10 states. Other leaders nationally were information services; professional, scientific, and technical services; and real estate and rental and leasing.

Personal income increased 0.5% and consumer spending rose 0.2% in February. Although that increase represents a raise in compensation, it was offset by a drop in government benefits – a trend that will continue over at least the next few months. Another good sign though is that the savings rate ticked up in February to 6.3%, up from 6.1% in January.

Although consumer spending ticked up slightly, with a boost in spending on services, consumers did an about face on goods after a blistering January. The increase in services was propelled by a 33% increase in people getting out to restaurants and accommodations. The motor vehicle and parts market was the primary drag on goods with a 30% drop in purchases (although there was a 27% increase in gas and other energy goods).

Conditions are still shaky globally. International transactions were down $218 billion in the fourth quarter and international trade was down $89.3 billion in February, just before the invasion. The BEA reported that the pandemic was continuing to affect trade and that recovery was slow, but that was reporting from data gathered before the invasion.

4 Big Expenses Your Clients Could Face In Retirement

The Market Will Come Back: What Financial Advisors Are Telling Clients About World Events