FIAs Could Overtake VAs By 2021

Fixed indexed annuities are predicted to grow to 40 percent of annuity production by 2023, which would put them on track to exceed sales of variable annuities by the end of 2021.

That was the word from a Cerulli study, which also predicted index-linked annuity sales will offer renewed opportunities for growth to carriers. 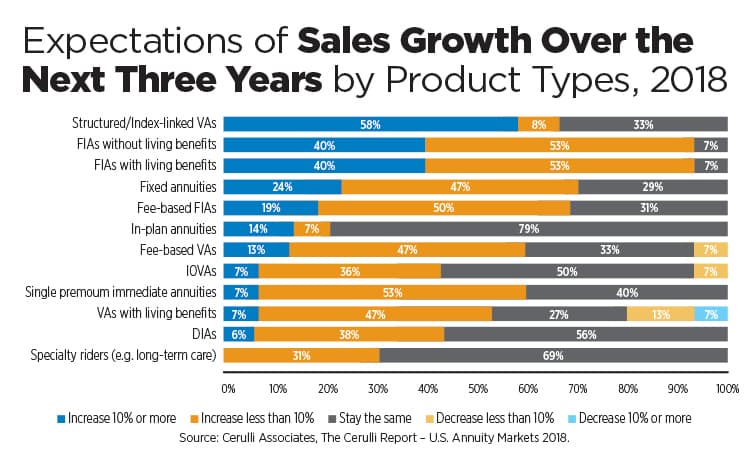 What’s driving these numbers? The stock market, guarantees and new product development are among the factors, said Donnie Ethier, director of wealth management and consulting for Cerulli.

“When you think about the annuities space, we’re 10 years out of the Great Recession of 2008 and we’ve been in a 10-year bull market,” Ethier said.

“In most corners of the financial industry, the dust has settled. However, in the annuities space, I wouldn’t say the dust has settled but you can still feel the impact of the recession. I think the best example of this is that in 2007 you had around 20 VA carriers that were competing with rather aggressive competitive guarantees and today you really only have 10 carriers and the top five of those carriers dominate sales.”

“So, FIA sales have nearly doubled while VA sales have come down by about a third,” he said. “We’re predicting that by year-end 2021, FIAs will make up greater market share of annuity sales than VA sales.”

Ethier said that when Cerulli researchers asked annuity carriers what’s behind the rise in FIAs, they found two factors.

1. Less attractive VA guarantees. Because the VA market has come down, the result is a resurgence of the FIA market where companies are more active and more interested in product development.

FIAs are getting a new look from carriers who wouldn’t consider offering them five years ago, Ethier said.

“The product development rate has been high and been encouraging,” he said. “We are seeing wealth managers and some of the larger broker-dealers and wirehouses starting to warm up to the concept of FIAs. They are almost driving the product activity and transparency by wanting levelized compensation or whatever it may be to increase that transparency factor which is driving sales.”

But, he added, that there is a very big difference between a broker/dealer home office approving a product and advisors implementing it into their practice. Some new FIA producers are coming into the marketplace, but the large majority of FIA sales are coming from prior annuity advocates, Ethier said. Big FIA producers remain loyal to FIAs and are taking advantage of new products.

“At the end of the day, we have more people retiring and more people who need guaranteed income. The need hasn’t changed but the supply of the products that give those benefits has increased.”

An Omen Of A Future Crash?

FIAs had strong growth during the 2008 financial crash. Does their comeback foreshadow a future market downturn? It depends on your perspective, Ethier said.

The overall annuity sales pie has become smaller, Ethier said. “Since 2010, the industry has lost sales, lost producers, lost benefits in that space,” he said. “There are fewer advisors selling annuities than there were eight years ago. But when you look at the details of that pie, you see the market share shifting in that smaller pie.” The overall annuity sales pie is getting smaller but FIAs are making up a larger portion of that shrinking pie.

The FIA/VA sales shift shows a “bit of cause-and-effect debate,” he said. “Was it the bear market that propelled FIA sales as we came out of it? Or was it the recession that made VAs less attractive, which then by default made FIAs relatively more attractive?”

Ethier said he believes that as FIA sales continued to pick up steam when the market moved from bear to bull, “you had more companies warm up to the idea of enriching what they already offered in the FIA space. And that’s essentially what propelled the industry.”

Going back to 2010 when the Great Recession essentially was over, carriers had exited the VA space, reducing supply. And the VAs that remained in the marketplace were less attractive than they were in 2007, Ethier said.

“Carriers saw their FIA sales increase as a result of what happened in the VA market,” he said. “Then you started to see new companies looking around and saying this is an opportunity.”

All of those factors are driving activity toward FIAs, he said.

“As you have new carriers entering the FIA space, everyone is simplifying them, making them a little more transparent. As that’s occurring, as a result, you have more B-Ds taking a look at them. That’s what’s driving sales.”

But not everyone is enamored with annuities.

The RIA channel is exploding in growth, Ethier said, but RIAs in general have not adopted annuities.

“Our model shows that in 2017, the entire independent RIA channel did about $3 billion in total VA sales,” he said. “More than 13,000 RIAs in the U.S., and they did less than $3 billion in sales! In 2017, 87 percent of RIAs did not sell an annuity. Out of the largest chunk that did, 12-13 percent sold fewer than five contracts. But that being said, when RIAs do write an annuity, it’s double any other channel in terms of an average sale.”

Ethier’s advice to advisors who sell annuities is to focus on annuities as a retirement income solution over other products.

“We asked advisors who don’t sell annuities why they don’t sell them,” he said. “The top two reasons are: annuities are too expensive, and my practice can build better retirement income solutions in-house at a lower cost.”

“I would point out that is a very easy thing to say when we are 10 years into a bull market. At the end of the day, those in-house solutions are not backed up with guarantees and those guarantees do come at a cost. I think a lot of advisors need to be reminded of the value proposition of annuities.”

One thought on “FIAs Could Overtake VAs By 2021”

Annuity Sales Spiked 14 Percent In 2018, No Slowdown In Sight