It might be true that retirement saving should be thought of as a marathon, but a recent poll showed it is more of a sprint until the investor hits 45, then it’s more of a steady lope until the finish line.

Investors between 45 and 54 chose “save for retirement” as their top reason for investing, with 82% selecting it in a Money Morning survey of 800 knowledgeable investors. “Grow their net worth” was No. 2 at 70%.

Also, twice as many Gen Zers than Gen Xers were willing to place bigger bets on their investments, with 10% of the younger cohort willing to invest 21% or more of their income vs. 5% of 45- to 54-year-olds.

Investing enthusiasm eases a bit in the Millennial years, with 6% stacking at least 21% into investments. They are in the early career, young family stage at ages 25-34.
Boomers are still in the game – well, at least 4% of them are. 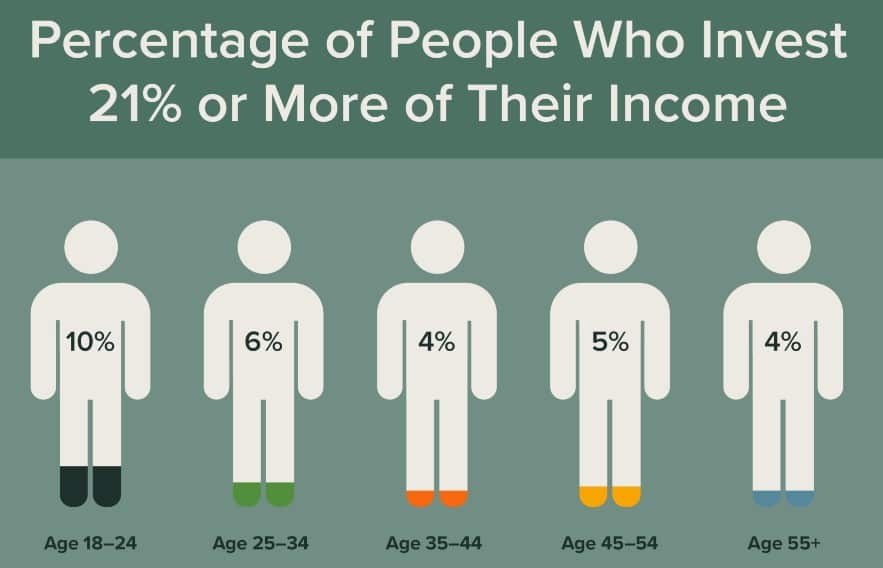 Gen Zers and Millennials would be wise to put away a bit more money early because they are starting their careers at a disadvantage, according to a Stanford University report done even before the pandemic.

“Research shows that college graduates who start their working lives during a recession earn less for at least 10 to 15 years than those who graduate during periods of prosperity,” according to a policy brief by researcher Hannes Schwandt, who added that the disadvantage can even be deadly.

“In particular, recession graduates have higher death rates in midlife,” Schwandt reported, “including significantly greater risk of drug overdoses and other so-called ‘deaths of despair.’”

Add the pandemic effect and the impact is even greater, with Gen Z expected to lose $10 trillion in lifetime income because of the lockdowns, according to the Bank of America’s report, “OK Zoomer: Gen Z Primer.”

The Money Morning survey found that unlike the disparities among age groups with many of the other factors in investing, the generations were of a single mind on the perception of risk. There was a slight split between genders on risk assessment, with 16% of women describing investments as “extremely risky” compared to 14% of men, according to the report. Men also tended to be more all-in on investing, with 9% of men saying investments were not risky vs. 5% of women.

Beyond risk perception, income and graduation had significant correlation with investing.

In education, for example, 75% of respondents with a post-graduate degrees invested at least 6% of their income. That group was also more likely to invest the most, with 8% of them putting at least 21% into investments. The pollsters said the difference could be related to the direct correlation between income and education. But they also pointed out that the higher income groups tended to invest equally.

“It may seem like common sense that investors with the highest income would be willing to invest the highest percentage of their money. After all, they likely have the most money after expenses to put into the stock market, mutual funds, and other investments,” according to the report. “However, our survey data found that the highest earners — those making $150,000 or more per year — reported investing 6% to 10% of their income. That’s the same percentage as respondents earning $50,000 to $74,999 per year.”

Where They Get Advice

The category of where people went for financial advice had good news for advisors but not so good for brokers. “Our survey suggests that investors use multiple sources before making their investment decisions but that they trust those in their circle as well as financial professionals,” according to the report. “It’s notable to see which sources didn’t rank high. Aside from the ‘other’ category, the least chosen option was ‘brokers.’”

Seven Questions To Create A Connection With Your Clients

Maximizing Income With A Navigational Approach