How Does President Biden’s First 100 Days Compare To Trump?

President Biden’s 100th day in office is tomorrow, on April 29. Hard to believe it has been 100 days already, but overall the economy continues to improve and stocks have done very well under our new President.

We’ve heard the question many times: Where does the Biden rally rank? That is what we will look at today. The term “hundred days” was first used on July 24, 1933, on the radio by President Franklin D. Roosevelt (FDR). He was discussing the 100-day session of the 73rd U.S. Congress, but over time this term has changed to refer to the first 100 days of a new president.

Per Ryan Detrick, chief market strategist for LPL Financial, “President Biden has been quite kind for stocks, with the Dow up nearly 10%, which is on pace for the best first 100 days in office since FDR in the early 1930s. Then toss in the cherry on top that stocks had one of their greatest rallies ever from Election Day until the inauguration and it is clear that although maybe everyone might not like President Biden, but the stock market doesn’t have many issues with him.”

As shown in the LPL Chart of the Day, the Dow has averaged 4.3% the first 100 days of a new President, while it has been higher the first 100 days in office for five of the past six Presidents. In fact, President Biden’s return currently ranks as the third best since 1900, with only Taft and Roosevelt better. Lastly, breaking it down by political party and the first 100 days under a Democratic President was much stronger, up 10.3% on average versus down 0.2% for a Republican President. 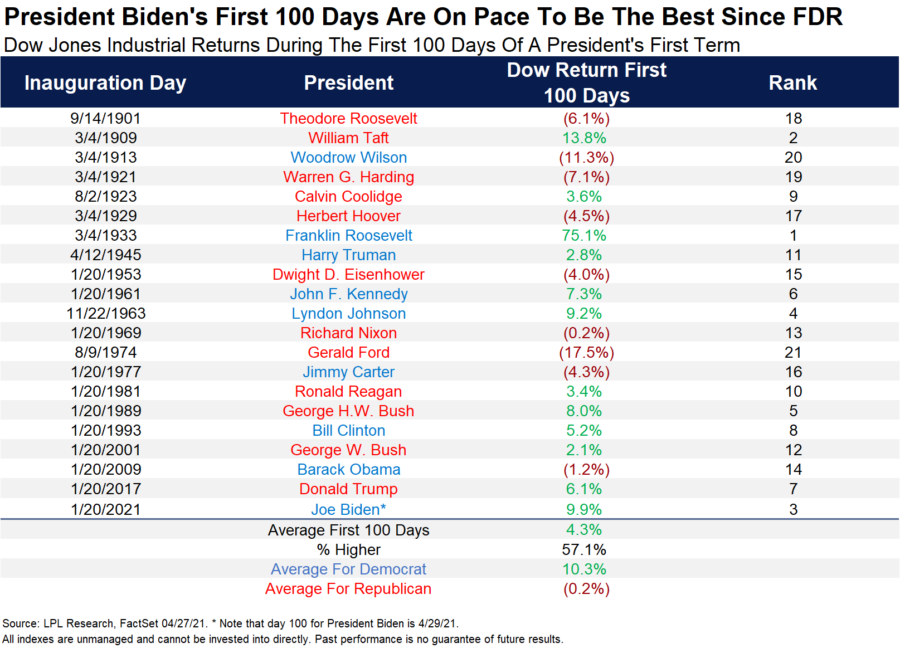 Here’s a chart we shared earlier this year that shows that stocks did amazingly well from Election Day until the inauguration under President Biden. What can we glean from those first 100 days? Is there any pattern that might suggest how stocks will do during the rest of the time President Biden is in office? You can look for yourself below, but there doesn’t appear to be any clue as to what might happen.

In the end, fundamentals, valuations, and technicals drive long-term equity returns. The good news is only once since the Great Depression did that mean lower returns for the remainder of time in office after the first 100 days. ETFs, Other Funds Taking A Big Bite From Mutual Funds