Acre has time management down to a science, part of his mastery of processes that go into the making of a successful financial services practice. He uses the app Habitify to break down his day into 15-minute increments and tells him what to get done and by what time to get it done. At the end of the day, the app Hubspot asks him what he did today and what his plan is for tomorrow.

He is the owner of OneSource Insurance Group in Ozark, Mo., a practice he described as the Walmart of financial services, insurance, real estate and tax services.

“We have 19 insurance and financial advisors specializing in different categories,” he said. “And then we have two people who do taxes and 13 real estate agents.”

A thriving practice, Acre said, boils down to three things: effort, performance and plan. And creating processes around all three of these things ensures accountability and a greater likelihood of success.

“When I think problem, I think process,” he said. “I look at the problem and then I identify the process to fix it.”

Acre, 38, has spent much of his time mentoring other young advisors, helping them get their business plans in order and nudging them toward adopting the right processes to solve whatever problems crop up in their practices. Acre’s work on behalf of the industry earned him the honor of Young Advisor Team Leader of the Year for 2014 from the National Association of Insurance and Financial Advisors.

“I ask the advisors I work with, if you’re seeing part of your sales cycle fail — if you’re having trouble setting the appointments or you’re having trouble getting your prospect to commit — what processes are you putting into place to make sure you don’t have those problems in your sales cycle?” he said. “Make it about your own problem and process. Make it very objective. It’s not about how I feel or how you feel or how the client feels; it’s about objective numbers and statistics and facts.”

Leading At A Young Age

After Acre graduated from Missouri State University, he worked in the business office at Mercy Hospital, Springfield, Mo. But he soon realized that job wasn’t for him and posted his resume to some employment websites. It wasn’t long before the insurance industry came recruiting and he had offers from a few companies.

“I felt the appeal of advising consumers on their insurance and financial services drew me into the industry as a whole,” he said. After interviewing at three or four companies, he chose the one that had the mentors he thought would be best to help him start his career. That company was Torchmark, parent company of Global Life and Accident, American Income Life, Liberty National and United American Insurance. 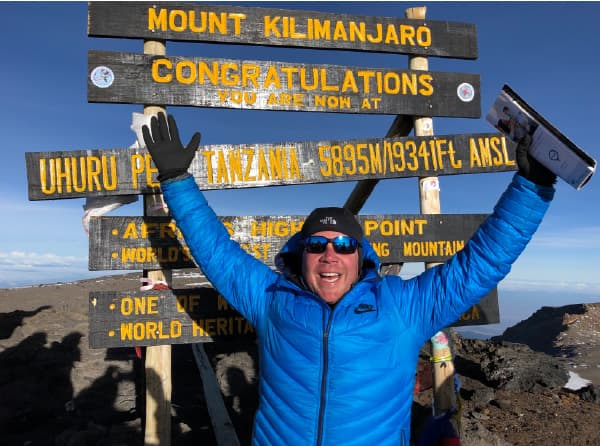 That first year was difficult.

“It took a lot of mentorship and accountability from my leaders,” he said. But he had people looking out for him. Mickey Tolliver was the branch manager who hired him, and became a long-time mentor. Mickey’s son, Travis, was Acre’s unit manager.

“I learned self-discipline at a young age quickly,” Acre recalled. “You have to get on the phone; you have to set the appointments; you have to go through the process they teach you. Trying to find shortcuts and doing it the easy way doesn’t work. That’s why there’s an 18% success rate in the first year for insurance and financial services advisors in this country. Only about one in five make it. Most of the time it’s probably because they want to do it their way and not the way their mentor is teaching them.”

That is when the power of processes became clear.

“It was a huge learning curve, but once I figured it out, I learned it’s all about repeatable processes,” he said. “It’s about people and taking care of the consumer and advising them correctly.”

Acre ended his first year as one of Torchmark’s Top 20 agents, and he moved into management. At age 26, he was Torchmark’s youngest director in history, managing 15 branches and 900 agents between Charlotte and Los Angeles. He flew out of Springfield every Monday, spending a week at each branch before flying home on Friday.

“All the branch managers were older than me but some of the agents were younger,” he said. “It was a good mix.”

Acre said he quickly learned to listen well and ask the right questions as he worked with branch managers and agents.

“I didn’t go in and start saying you need to recruit better because your recruiting numbers stink, or your sales numbers stink and this is what you need to do to fix it,” he said. “I don’t care whether you’re 26 or 56, it would still be best to go in and ask questions about what their pain points were, how I could help them.”

At one point during his time in management, he helped salvage the career of an agent who was convinced her move to the insurance business had ruined her.

“In Charlotte, an agent came in and said the branch manager ruined her life,” Acre recalled. “He talked her into leaving a $40,000-a-year job to take a commission-only job and she wasn’t making it. I spent hours with her that day, just talking through her business plan, talking through her processes, talking about what she had been taught in the agency. I don’t take credit for this but I’ll say she ended up being a great agent and promoted into management. She just hadn’t been given the opportunity to be heard and I listened.”

After three years of traveling to Torchmark’s branch offices week in and week out, Acre wanted to settle down with his wife and start a family. He was on a plane when inspiration struck.

“I saw an ad for a vacuum cleaning company on the plane,” he said. “The ad said, ‘We are your one source for all your vacuuming needs.’ I thought that would be a good name for an insurance company — OneSource.”

Acre started his company in 2007 and set out to make it the one source for everyone’s insurance and financial needs. Today, he and his team produce more than $10 million in annual premium and have $45 million in assets under management.

He started out offering life and health insurance and Medicare products. From there, he branched out, offering property/casualty insurance and retirement planning services. Next was the addition of tax preparation services, and then the real estate agents joined the business.

Acre spends time traveling around the country talking to young advisors as part of his work with NAIFA’s Young Advisor Team. He continues to emphasize the importance of finding effective ways to serve their clients and run their practices.

“I tell them an old saying my grandfather told me: ‘Smart people learn from their mistakes; wise people learn from the mistakes of others,’” he said. “I tell them, you’re going to make mistakes, and you can get smart from messing up and getting better from those mistakes. But watching those who have gone before us and listening to them tell us what happened and what they did to create that failure hopefully helps you not create that failure in your own practice.”

Acre is a graduate of NAIFA’s Leadership in Life Institute, and the program made such an impact on his life that he hired the LILI moderator for Missouri, Deb Coulter, as a producer in his practice.

When Acre was her LILI student, Coulter said, he impressed her with his preparation, his motivation and his focus on building his practice.
Acre goes above and beyond to create a positive workplace environment for his agents, Coulter said. “We have our Monday morning meetings and he makes them include motivation and sales ideas,” she said. “He makes us feel we are not in competition with each other, but we’re a team.”

Acre and his wife Stephanie have three children: Brynn, 9, Maddox, 6, and Tobias, 5. Despite their hectic lives with their jobs and their children’s activities, the couple sits down together at 8:30 p.m. each day to spend a half-hour talking about whatever is on their minds.

He also is chairman of a nonprofit organization called Man Up And Go. The group’s mission is to serve the fatherless, empower single mothers and equip men to lead. His involvement with the organization led him to climb Mount Kilimanjaro in 2014.

“We have a strong partnership with people in Ethiopia and Uganda, and someone suggested we climb Kilimanjaro for a fundraiser,” he said. “A team of us traveled there and did the climb.”

The climb proved to be a physical challenge as well as a time commitment, Acre said. “But I heard a quote one time that said, ‘The absence of challenge degrades the human being’ and I thought, ‘Well, here’s a challenge, let’s see if you can do it, Mark.’”

Training for the climb in Missouri where the highest altitude is 1,700 feet was different from climbing the 19,000 feet to Kilimanjaro’s summit, Acre said. But 13 men from the group made it to the top of Africa’s highest peak and raised $40,000 for their organization.

Looking ahead to the future, Acre sees more peaks to climb and more challenges for growth in his professional life.

Implementing Reg BI: What Advisors And Their Firms Need To Know