It’s a choice many people face when they hit retirement age: Keep their funds in a lump sum “nest egg” or put some of that money into a vehicle that provides them with guaranteed income for life.

LIMRA research indicates more people are receptive to the guaranteed income option, but certain consumer segments are more receptive than others.

Having enough money to last a lifetime was the major goal across all financial segments in a recent LIMRA Secure Retirement Institute survey of pre-retirees and retirees. In addition, as many as one-third of pre-retirees said they fear running out of money in retirement.

Yet, despite these concerns, less than half (47%) of Americans said they would be willing to convert at least part of their assets into a guaranteed lifetime income stream. Thirty percent of pre-retirees and retirees said they would be interested in this option.

But these somewhat low percentages mask the fact that a strong majority of consumers across all income groups agree that having guaranteed lifetime income gives people peace of mind in retirement.

In addition, when presented with a hypothetical choice at retirement between guaranteed income and a lump-sum amount, more than half (52%) of pre-retiree and retiree investors selected guaranteed income, LIMRA SRI researchers found.

If consumers are saying they value having guaranteed income in retirement, why are so few of them buying annuities? And are consumers becoming more receptive to putting some of their funds into an annuity?

Consumers have become more receptive to annuities over the years, and guarantees are part of the reason, according to Matt Drinkwater, LIMRA SRI corporate vice president. 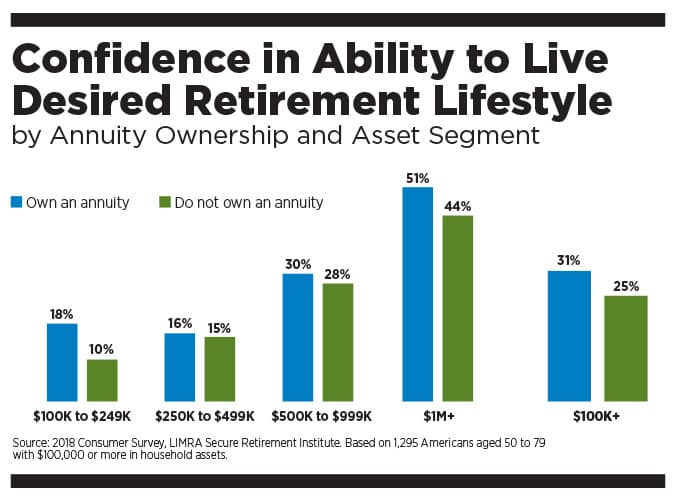 “If you go back to 2008, because of the financial crisis, people were seeking guarantees but they also were skeptical of guarantees because, at that point, everything seemed to be crashing down,” he said. “If you asked people the value of guarantees, it was low at that point. But it actually has gone up since then, and now we see regularly in our research about 40 percent of people who are in that appropriate age range for annuity purchases expressed interest in the concept.”

Pre-retirees are afraid of outliving their income, LIMRA research showed, and the greatest fear shows up among those with between $100,000 and $499,000 in household financial assets.

Much of that fear stems from the realization that today’s pre-retirees will have a post-employment life much different than that of their parents and grandparents, Drinkwater said.

“Today’s pre-retirees will probably live longer. They might also have a longer health span, so they’ll be healthier and more active. That requires more money, more income to maintain their living standards. And, for a variety of reasons, they can expect to receive less income replacement from Social Security and certainly less from pensions. So when we compare pre-retirees with retirees, we do tend to see that pre-retirees express more of a concern about outliving income.”

But, Drinkwater cautioned, the concern about outliving income in retirement doesn’t necessarily mean people are concerned about living to age 100 or beyond.

“It’s not that people are thinking, ‘I’m going to live 45 years in retirement,’” he said. “It means, ‘However long I do live in retirement, I’m worried about spending down my assets. I don’t know how much I can spend. I don’t know what a safe withdrawal rate is. I’m concerned about health care costs.’ So I think that’s playing into that concern about outliving income.”

Although the LIMRA study showed consumers had a certain amount of annuity reluctance, those consumers who do own annuities showed confidence in their ability to live their desired lifestyle in retirement.

Annuity owners had greater confidence than non-owners across all income segments, but that confidence was most pronounced among those with $1 million or more in household assets. So does that confidence come from the wealth or from the annuity? Drinkwater has a theory.

“The first effect is wealth. Richer people express more confidence,” he said. “So it’s interesting to see if these two effects interact in some way.

An “interesting curved pattern” exists when it comes to interest in annuities, Drinkwater said.

“If you ask people who have very little money — $50,000 to $100,000 — they’re not interested in lifetime income. And the reason is that this group is replacing a lot of their income with Social Security and they don’t have much money to apply to anything anyway. And those who have $3 million-$5 million, they’re not interested. Those with $3 million, you can still make an argument for annuities, but once you get to $5 million, you’re probably not going to live long enough to spend down all your assets anyway.”

That makes consumers in the mass affluent segment — those with $100,000 to $1 million in household assets — the “sweet spot” for annuities, Drinkwater said.

“They have the need, they have the money, they’re interested. Outliving their assets is a real risk for them. And we have seen that in our research,” he said.

Advisors can steer the retirement-planning discussion into a conversation about annuities in a number of ways, Drinkwater said.

“If you have a client and it’s already been established that this client is concerned about outliving their assets, if you know it’s an overriding priority with them, then it’s actually in the client’s best interest to hear about solutions that include annuity products,” he said. “The advisor could start out by discussing familiar concepts such as Social Security and pensions. People understand that those provide lifetime income to retirees. 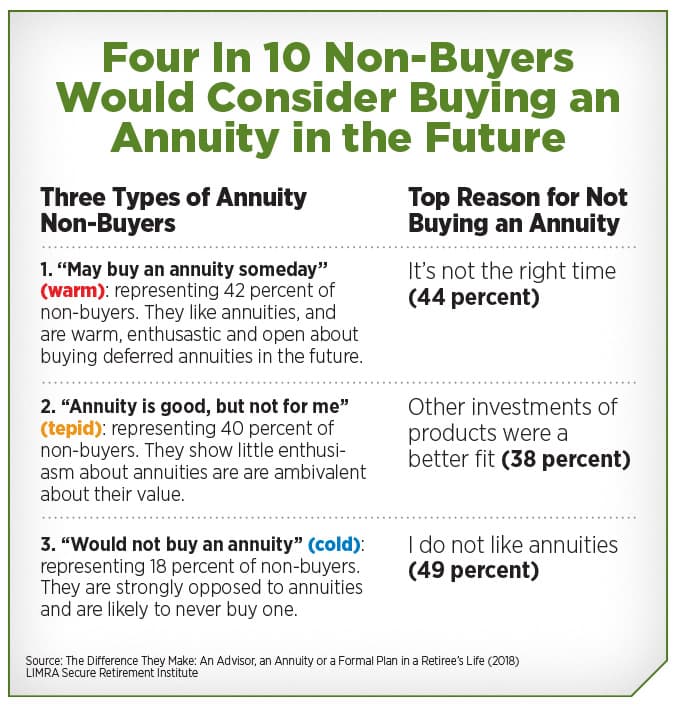 “And an annuity is like a personal pension. The catch, of course, is that you’re applying your own savings to pay for it. People say, ‘I saved up that money and you’re asking me to hand over a portion of it and I don’t know how I feel about that.’”

But more people will reach retirement age with their wealth tied up in defined contribution plans and individual retirement accounts, Drinkwater added.

“I would say, what is the purpose of those funds? Aren’t those savings there that you built up for retirement income, not to sit watching the stock market and you do nothing with that money, you’re not using that to improve or at least maintain your living standard? I would say that money is there to generate income.”

The annuity buying decision “is not an all-or-none decision,” he said.

“People have multiple goals and objectives in retirement. It doesn’t make sense to deploy all the assets toward one goal,” he said. “So advisors would start by saying, ‘Look, how do we deploy the assets you’ve built up over the years, and some portion of those should probably go toward topping off your lifetime income from Social Security and the rest can go toward emergencies, special expenses, legacies, gifting and all of that.”

It might take some convincing to get a client to give up control over part of their nest egg to convert it to guaranteed income. Keep in mind that the LIMRA study showed only 30% of retirees and pre-retirees were interested in putting part of their savings into a retirement income product. Drinkwater had some suggestions for advisors.

Advisors will never be able to convince everyone to purchase guaranteed lifetime income products, he said. Annuities may not be suitable for everyone, and there will always be some consumers who have such a negative opinion of the product that an advisor won’t be able to change their minds.

“You have to let some of these people go if you can never convince them,” he said. “I think the more achievable goal is to identify those clients who have both the need and at least some acceptance of the concept.”

LIMRA SRI research showed consumers have varying degrees of annuity acceptance. Instead of trying to convert the annuity haters into annuity buyers, Drinkwater said, there is more sales opportunity in the segment that says annuities are not the right product for them right now.

“I would also say that there are different flavors, different types of guaranteed lifetime income,” he said. “Those more financially sophisticated clients — the ones with more experience managing money — they’re the ones who don’t want to relinquish control. So a pure annuitization product isn’t going to resonate with them.

Generation X clients are skeptical about Social Security’s future, Drinkwater said, making this group a good market for annuities. “Advisors can tell them, ‘Social Security will be there but it will only support so much of a working income. There is a way to get a reliable paycheck for life in retirement, maybe we can talk about it in a few years.’”

But for most consumers, Drinkwater said, the key to getting them to accept annuities is for an advisor to “boil down annuities to their core value — what do they do for me?”

“Why should I care about this product? Because this product provides you peace of mind. You don’t have to worry about this aspect of your retirement.”