Pandemic Has Been Healthy For The Upper Incomes

Affluent Americans are not only doing better than their less-wealthy contemporaries but they are also further ahead than their parents were at their age.

Both findings from a recently released Bank of America survey run counter to the experience of many average Americans, particularly those on the lower end of the income scale. Meanwhile, wealthier people have been able to sock away more cash into savings during the pandemic as they focused on improving their financial position.

Four out of five respondents to the BOA survey have taken money normally spent on entertainment, travel and dining and set it aside, with 52% putting it in savings accounts and 25% building up their emergency funds.

The wealthy are leaping far ahead of lower-income groups’ long-term goals. The survey found that the majority of affluent Americans are prioritizing many traditional milestones in life, such as buying a house. 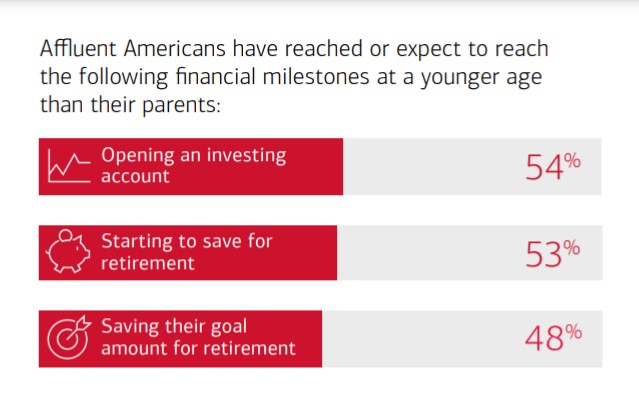 They tend to be happy with their financial choices in life, with 89% of Generation X, baby boomer and senior respondents satisfied with the financial decisions they have made. They had a few regrets, though, with a third of these respondents (34%) saying they would have done things differently, such as wishing they had saved more (66%) and they had started saving, 59%, and investing earlier (61%).

Affluent Americans have been able to pivot their focus on concerns other than money. When asked about the most important measures of personal success today, respondents chose goals such as good health, 63%.

They tended to worry about events affecting their situation, with 62% concerned about economic recession, 55% about market volatility, 50% with the rising cost of healthcare, and 44% with the global health crisis.

“The health crisis has caused many people to take stock of their life priorities and to control what they can during a period of uncertainty,” said Aron Levine, BOA president of Preferred and Consumer Banking & Investments. “In addition to getting their finances in order, people are looking ahead at new possibilities, plotting a course for their future and engaging with educational resources and advice that will help them make informed financial decisions and pursue new and exciting goals for themselves and their families.”

Down In The Down Market

A recent Pew Research Center study confirmed BOA’s finding, with 39% of the upper income groups saying their family’s financial situation has improved compared with a year ago. Upper-income adults were also more likely than those with middle or lower incomes to say they have been spending less and saving more money since the coronavirus outbreak began. Overall, about half of non-retired adults said the economic impact of the coronavirus outbreak will make it harder for them to achieve their long-term financial goals. For those who said their financial situation has gotten worse, 44% think it will take them three years or more to get back to where they were a year ago. Another stark divide was along racial lines, with 60% of whites and 58% of Asian adults saying their personal financial situation is in excellent or good shape. That was the inverse of the situation for Black and Hispanic respondents, with 66% of Black and 59% of Hispanic groups saying their finances are in only fair or poor shape.