Single Retirees In Search Of LTRs With Advisors

Media often depict retirement as idyllic — a couple holding hands and taking a long walk by the water or sitting on a white beach in a pair of easy chairs. Rarely are single retirees portrayed similarly. However, single retirees are an important part of the U.S. retirement market. Should advisors view the single retiree market differently? They should.

The Single Retiree Market Is Big

According to LIMRA Secure Retirement Institute’s analysis of the Federal Reserve Board’s 2016 Survey of Consumer Finance data, there are 7.6 million single pre-retirees and retirees aged 55 or older in the U.S. with investable assets of $100,000 or more — nearly two-thirds of them are single women. In addition, single pre-retirees and retirees control $6 trillion in investable assets. This represents great opportunity for financial professionals.

Single retirees face unique retirement challenges compared with their married counterparts. In general, single retirees are largely responsible for their own retirement security, which includes their financial, emotional and physical well-being. As these individuals face these challenges, it is critical that they exercise prudence — and seek an advisor’s help — when making decisions about retirement.

Apart from higher longevity risks — especially for women — there are other reasons for low retirement confidence: (1) single retirees may have no one to rely on; (2) single retirees spend proportionately more of their income on essential expenses such as housing, food and utilities than couples do; and (3) many single retirees do not own their primary residences. The study shows that many single retired women underestimated their expected expenses primarily because of higher expenditures for housing and the need to provide financial support to (mostly younger) family members.

Working With An Advisor Improves Outcomes 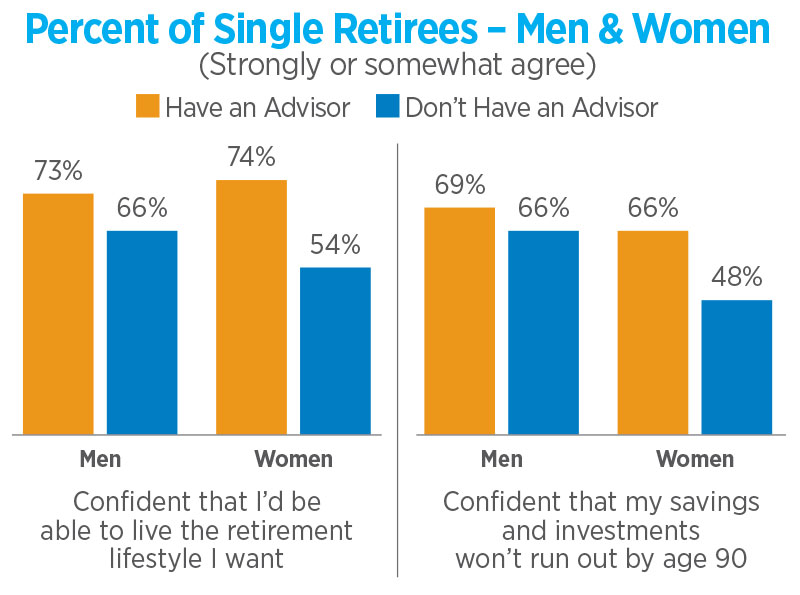 This trust and reliance on advisors have important future implications. More than one-third of single retirees want to rely on their advisors for more help in financial decision-making as they age. Therefore, the capacity and skill to deliver a personalized formal income plan will be the key to building growth in this market. Advisors should consider relationships with their single retiree clients as longterm and prepare accordingly. Advisors helping clients with a solid plan will have an edge over their competition by making their single clients confident and lifetime loyal clients.

Jafor Iqbal is associate managing director, retirement research, for LIMRA Secure Retirement Institute. In this role, he is responsible for managing retirement income research projects. Jafor may be contacted at jafor.iqbal@innfeedback.com.