Americans have a whopping $67 trillion of investable assets, meaning that advisors are fishing in a well-stocked lake.

“If you’re a consumer, a high-net-worth household, or even a massive-affluent household, and you’ve had your money in the stock market, you’re feeling pretty flush right now,” Roame said. “Things have been going your way. If you’re a wealth manager, you probably think you’re doing really, really well. The reality is everyone’s doing really, really well.” 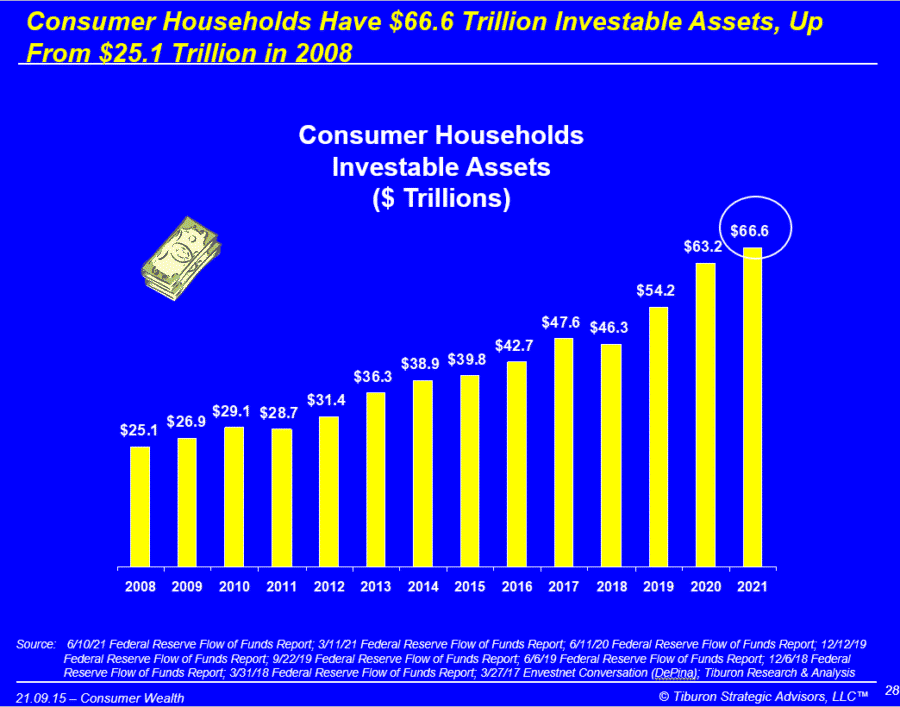 Unsurprisingly, retirement plan assets have grown nearly as well, doubling in 13 years to $29.9 trillion. Advisors and insurers are eager to take advantage of changes in the law that will make it easier to sell life insurance and annuities into these plans.

The shift to defined contribution plans is reflected in the assets, with $9.6 trillion now held in DC plans. That figure was $3.4 trillion in 2008, Roame noted. Americans have $150 trillion in combined household assets, up from $118 trillion three years ago. This is largely a reflection of how well real estate has done in recent years, Roame said. The good news is household debt stands at $17 trillion and is rising at a much lower rate.

“Assets have doubled, and more than doubled, debt has only gone up about 30%,” Roame explained. “And that bodes well for net worth in America.”

Boomers Have More To Say

However, they will still control a relatively small amount of investable assets. “People are rushing the baby boomers into their retirement or into the grave,” Roame noted. “Frankly, their money is still going up, not down. The silent generation’s money is going down. And the millennials, which everyone is always overly excited about, sure they’re growing, but it’s a little sliver down at the bottom there.”

Conventional wisdom seems to focus most on baby boomers handing down assets and money to their heirs, Roame said, but that might not be accurate.

“What’s really going to happen is baby boomers are going to liquidate money first,” he explained. “So the boomers have their money in the retirement plans, in their homes and in the small businesses, and that money will move to become investable assets. So if I’m in the wealth world, or the investment management world, your first thing to think about is not the generational wealth transfer. It’s the liquidation.”

Women represent 51% of all Americans and control 51% of household wealth, Roame said. From there, the similarities seem to end. While 71% of men claim to be confident in their retirement goals, only 55% of women say they are.

Likewise, 70% of men say they are “extremely knowledgeable about investments,” while 53% of women say they are. Whether the answers are accurate or not, it can mean more business for advisors. 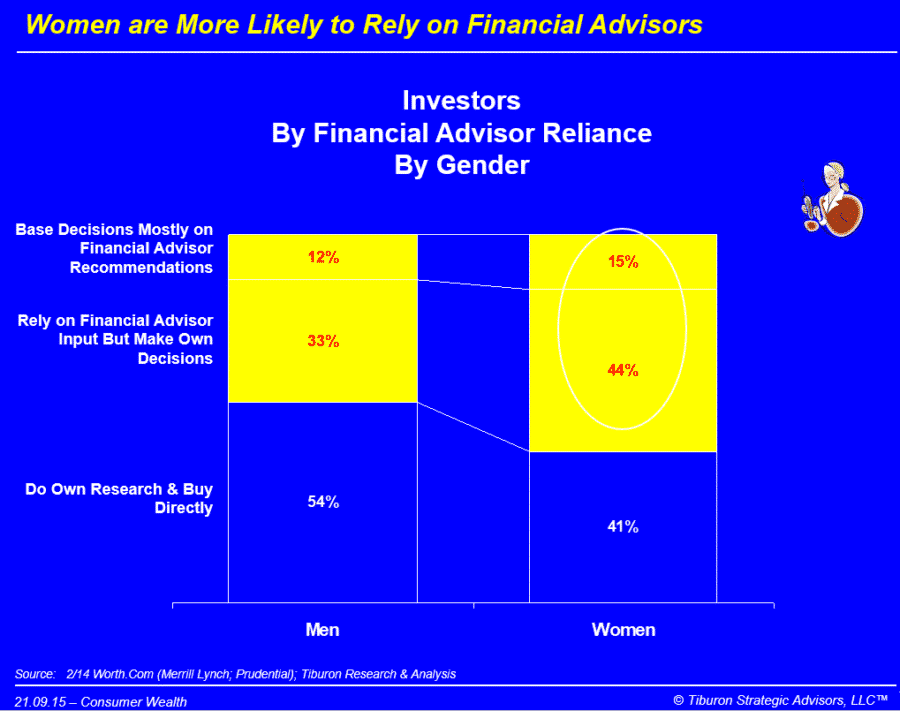 “Women are more worried about running out of money,” said Cheryl Nash, CEO of InvestCloud Financial Supermarket, in a comment Roame cited. “They outlive men so they need more savings.”