, /PRNewswire/ — It's not just beards, butchers and bicycles that Generation Y – or "Millennials" – are bringing back.  The youngest adults in America, aged 18-29, are also showing signs that they're old souls in the way they manage their money.

This finding was uncovered through the 2014 Planning and Progress Study, an annual research project commissioned by Northwestern Mutual that explores Americans' attitudes and behaviors toward finances and planning.

According to the research, Millennials recognize the importance of saving and investing and tend to be more proactive about planning than their older counterparts.

The study surfaced a range of distinct attitudes and behaviors towards money among Millennials, notably:

"While not quite putting money in the mattress, Gen Y definitely takes a more retro approach to how they handle their finances," said , Northwestern Mutual executive vice president.  "I'm guessing they're making a lot of grandparents very proud."

Millennials want help but don't know where to turn for it

Though they may be ahead of the curve in making financial planning a priority, the large majority of Millennials recognize they can do even better.

"Many twentysomethings have fairly straightforward finances at this stage in their lives, so it makes sense that only a small percentage work with advisors," said Oberland.  "But clearly, the appetite and attitudes make for great opportunity. &nbsp;For advisors, the message is clear – if they can meet in kind the interest, discipline and humility of Millennials, they may very well have relationships for a lifetime."

To support Millennials on their journey towards financial independence, Northwestern Mutual recently launched http://www.themintgrad.org/, a financial education resource with content and tools designed for the unique needs of this generation.

Northwestern Mutual's 2014 Planning & Progress Study explores the state of financial planning in America today, and provides unique insights into people's current attitudes and behaviors toward money, goal-setting and priorities. Northwestern Mutual will release additional results and a series of multi-media materials over the coming weeks.

This study was conducted by Harris Poll on behalf of Northwestern Mutual, and included 2,092 American adults aged 18 or older who participated in an online survey . Results were weighted as needed for age by gender, education, race/ethnicity, region and household income. Propensity score weighting was also used to adjust for respondents' propensity to be online.  No estimates of theoretical sampling error can be calculated; a full methodology is available. 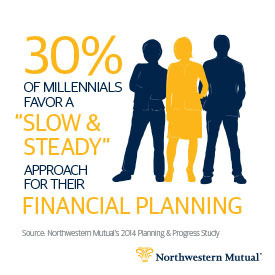