, /PRNewswire/ — (NYSE: VOYA), released findings today from a new study — the Voya Retire Ready Index™ — which measures the retirement readiness levels of Americans who are either working or recently retired.  The study shows how each group of individuals score on an average basis, while also examining the attributes of those who score at the highest levels in order to learn more about what they do to prepare.

The Voya Retire Ready IndexTM was designed on the premise that successful retirement preparation involves three important components – 1) sufficient knowledge and awareness of how to prepare (“knowing”); 2) accurate and comprehensive planning activity (“planning”); and 3) adequate savings to generate sufficient income replacement (“having”).  The study incorporated two surveys that were conducted with , Inc.  The surveys asked current workers (the “Workers”) and recent retirees (the “Retirees”) a series of questions related to these three retirement readiness components. Using the survey results, scores were calculated on a scale from zero to ten in each category, and then again on an overall basis to come up with a combined score.1

The findings show how Americans are generally behind in their readiness, and that planning represents their most significant hurdle as well as the area with the most opportunity for improvement.  Workers who were surveyed for the Voya Retire Ready IndexTM averaged an overall score of 4.1 out of ten, while Retirees averaged a 5.5.

Voya’s study found that out of the three categories, both Workers and Retirees score highest on knowledge, but lowest in planning.  Workers average a 3.0 in the planning category, while Retirees score slightly better at 4.2.  The findings show that fewer than one-in-five Workers (17%) and only about one-quarter of Retirees (26%) had a written financial plan, while roughly one-third of Workers (31%) and Retirees (35%) had a comprehensive budget.  The study also reveals gaps in retirement income planning, as more than six-in-ten Workers (63%) had never attempted to calculate what their savings would be if converted into future monthly income.

“While knowledge of retirement-related concepts is an important foundation which should always be improved, the findings reinforce what we know is required to help advance retirement readiness — more individuals need to put their knowledge to action,” noted Nichols.  “That’s why resources such as Voya’s myOrangeMoneyTM and online budget tools are critical to helping Americans take the necessary steps toward developing a true long-term retirement plan.”

Despite their low planning scores, a significant majority of those surveyed for the Voya Retire Ready IndexTM agreed that certain planning-related activities would boost their sense of confidence and control.  More than eight-in-ten Workers (83%) and three-quarters of Retirees (76%) confirmed that calculating the amount of future monthly income their savings produced would provide at least a moderate boost in confidence.  Two-thirds of Workers (66%) said using self-directed financial planning and budgeting tools would provide this same benefit.

“We know this disconnect between what people say could help improve their financial security and what they actually do is caused by a number of factors, including inertia, anxiety, competing financial priorities and the fact that many view retirement as a distant concern,” said Nichols.  “Still, our findings demonstrate that some are successful in breaking through these barriers.”

Voya’s study found that a sub-set of Workers and Retirees did report to be more proactive and well-prepared, and they averaged the highest scores on the Voya Retire Ready IndexTM.  These individuals engaged in behaviors which put them into Voya’s “role model” category for readiness.  Some of the key findings related to these two highest-scoring groups include the following:

“Perhaps the most surprising insight is that today, through innovations in financial technologies and increased access to professional advisors, Americans have more ways to take action, build confidence and improve their chances for achieving a secure retirement,” added Nichols. “Our challenge is to ensure that more people know where to find these resources and that they take the necessary steps.”

Voya offers retirement customers a suite of accessible, compelling and easy-to-use retirement readiness planning resources — from field- and phone-based financial professionals, to a number of innovative digital planning and budgeting capabilities.  These resources are available to help individuals with a broad range of activities, such as understanding their retirement income needs to budgeting and protecting their financial security.

As an industry leader and advocate for greater retirement readiness, Voya is committed to delivering on its vision to be TM and its mission to make a secure financial future possible — one person, one family, one institution at a time.

1. The Voya Retire Ready IndexTM results are based on findings from two online consumer surveys completed with , a full-service market research firm with expertise in financial services.  One survey involved 1,008 workers over the age of 21 who were employed full time and managed or shared in the financial decisions of the household (the “Workers).  A second survey involved 1,002 adults below the age of 85 who had retired within the last five years, managed or shared in the financial decisions of the household and, if married, had a spouse who was not working full time (the “Retirees”).  Both surveys asked a parallel set of questions to assess the retirement preparedness of each group.  Data on the Workers was weighted according to data from the and the .  The following demographic variables were weighted: household income, gender, and education.  Each category was constructed to have a maximum possible score of 10 (where responses were weighted based on factors selected by Voya, and where weighting responses using alternative factors would yield different results).  The scores were then averaged together to determine a cumulative score for Workers and Retirees.  The Voya Retire Ready IndexTM scores are based on survey findings that were averaged together and do not reflect any single respondent’s experience.

(NYSE: VOYA), is composed of premier retirement, investment and insurance businesses serving the financial needs of approximately 13 million individual and institutional customers in . The company’s vision is to be TM and its guiding principle is centered on solving the most daunting financial challenge facing Americans today — retirement readiness. Working directly with clients and through a broad group of financial intermediaries, independent producers, affiliated advisors and dedicated sales specialists, Voya provides a comprehensive portfolio of asset accumulation, asset protection and asset distribution products and services. With a dedicated workforce of approximately 6,500 employees, Voya is grounded in a clear mission to make a secure financial future possible — one person, one family, one institution at a time.  For more information, visit http://voya.com or view our Voya Financial Interactive Company Profile.  Follow Voya Financial on Facebook and Twitter @Voya. 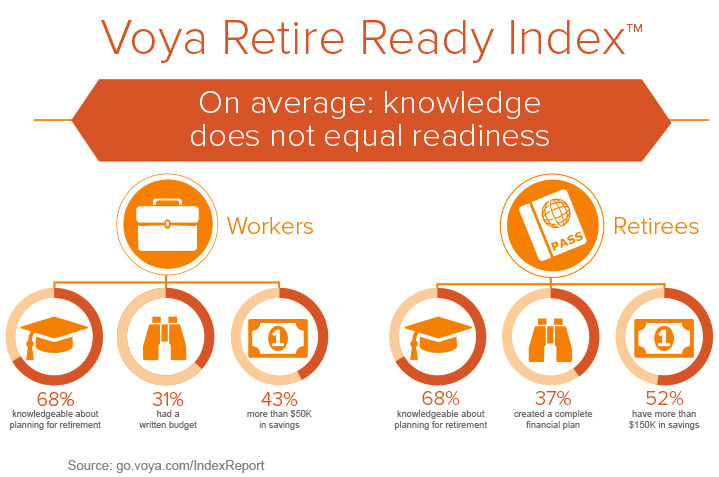 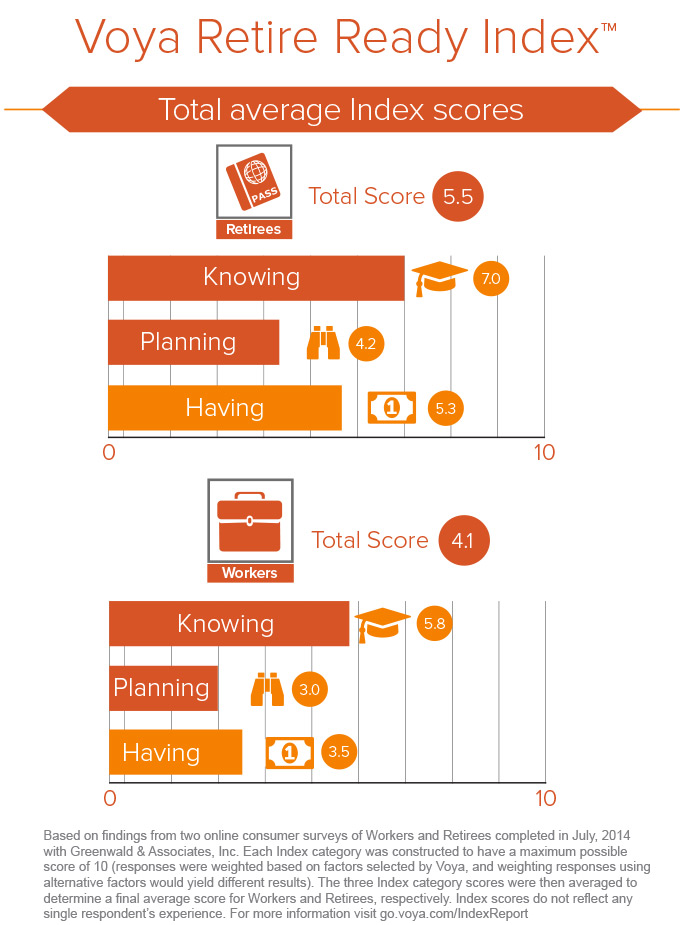 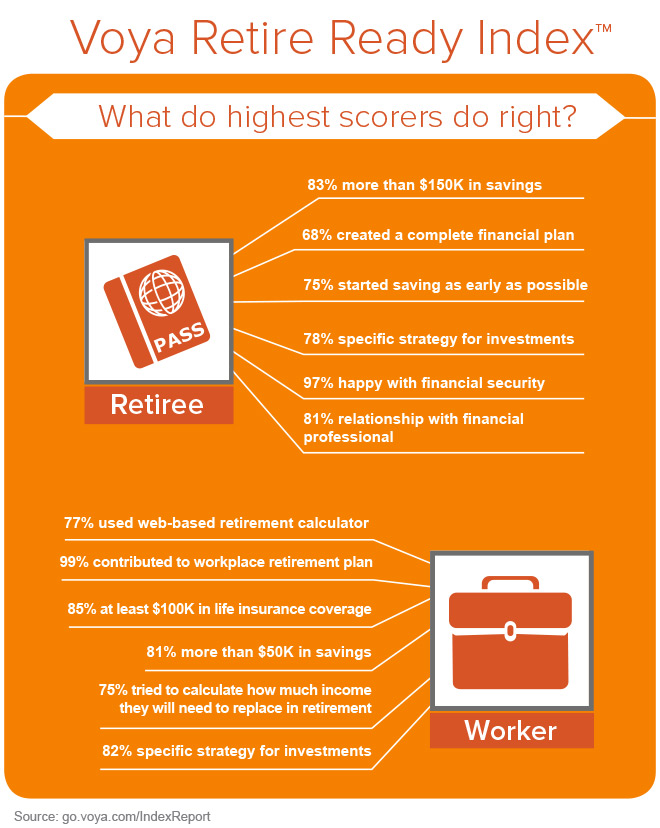 To view the original version on PR Newswire, visit:http://www.prnewswire.com/news-releases/voya-financial-study-reveals-how-americans-score-on-their-retirement-readiness-reinforces-the-importance-of-planning-300057234.html