International Business Times
The stock market’s brutal year neared a grim milestone as the S&P 500’s slide on Monday threatened to leave it in a bear market for the first time since March 2020, fueled by worries over sky high inflation, a hawkish Federal Reserve and future economic growth.The benchmark S&P 500 index fell below 3837.248 during Monday’s session, a decline that on an intraday basis put it more than 20% below its Jan. 3 record closing high. If the index maintains such a decline through the market’s close, the 20% drop would confirm a commonly used definition of a bear market.

If history is any guide, a bear market would mean more pain could be in store for investors. The S&P 500 has fallen by an average of 32.7% in 13 bear markets since 1946, including a nearly 57% drop during the 2007-2009 bear market during the financial crisis, according to Sam Stovall, chief investment strategist at CFRA.

It has taken a little over a year on average for the index to reach its bottom during bear markets, and then roughly another two years to return to its prior high, according to CFRA. Of the 13 bear markets since 1946, the return to breakeven levels has varied, taking as little as three months to as long as 69 months. 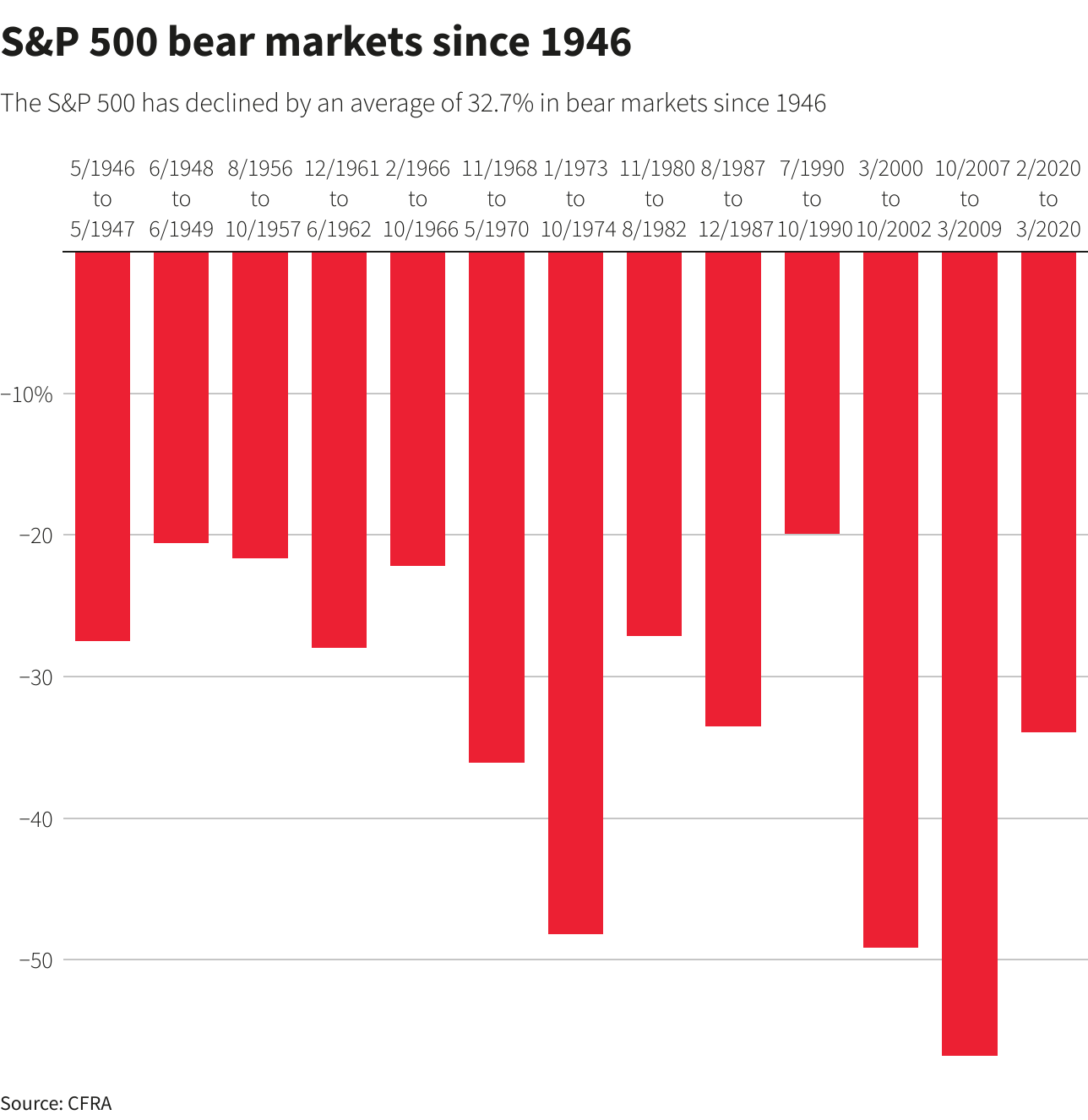 The S&P 500 surged some 114% from its March 2020 low as stocks benefited from emergency policies put in place to help stabilize the economy in the wake of the COVID-19 pandemic.

Those gains went into reverse at the start of 2022 as the Fed grew far more hawkish and signaled it would tighten monetary policy at a faster-than-expected clip to fight surging inflation. It has already raised rates by 75 basis points this year and expectations of more hikes ahead, including at this week’s Fed meeting, have weighed on stocks and bonds.

Fed Chairman Jerome Powell has vowed to raise rates as high as needed to kill inflation but also believes policymakers can guide the economy to a so-called soft landing. Adding to the volatility this year has been the war in Ukraine, which has caused a further spike in oil and other commodity prices.

After the S&P 500 nearly confirmed a bear market last month, the market rallied back, amid some hopes the Fed could slow its rate-hike pace later this year.

But Wall Street last week posted its biggest weekly decline since January, with the latest blow to stocks coming on Friday, when data showed U.S. consumer prices accelerated in May as gasoline prices hit a record high and the cost of food soared, leading to the largest annual increase in nearly 40-1/2 years.

A few areas of the stock market have been spared. Energy shares have soared this year, along with oil prices, while defensive groups such as utilities have held up better than broader markets. 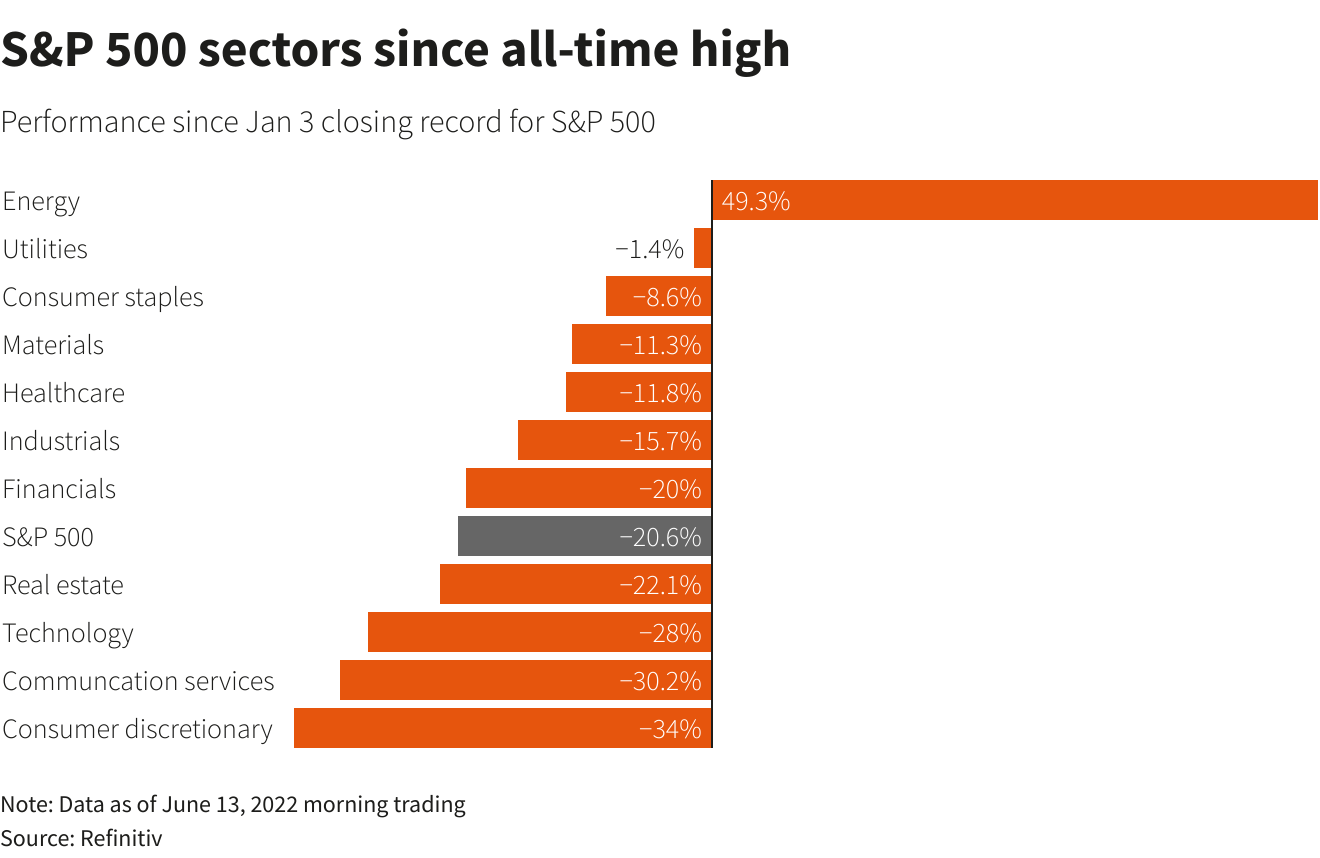 On the flip side, shares of technology and other high-growth companies have been hit hard. Those stocks — high fliers during much of the bull market over the past decade — are particularly sensitive to higher yields, which dull the allure of companies whose cash flows are weighted more in the future and diminished when discounted at higher rates.

Some of the biggest of these companies, such as Tesla and Facebook owner Meta Platforms, are also heavily weighted in the S&P 500 index. 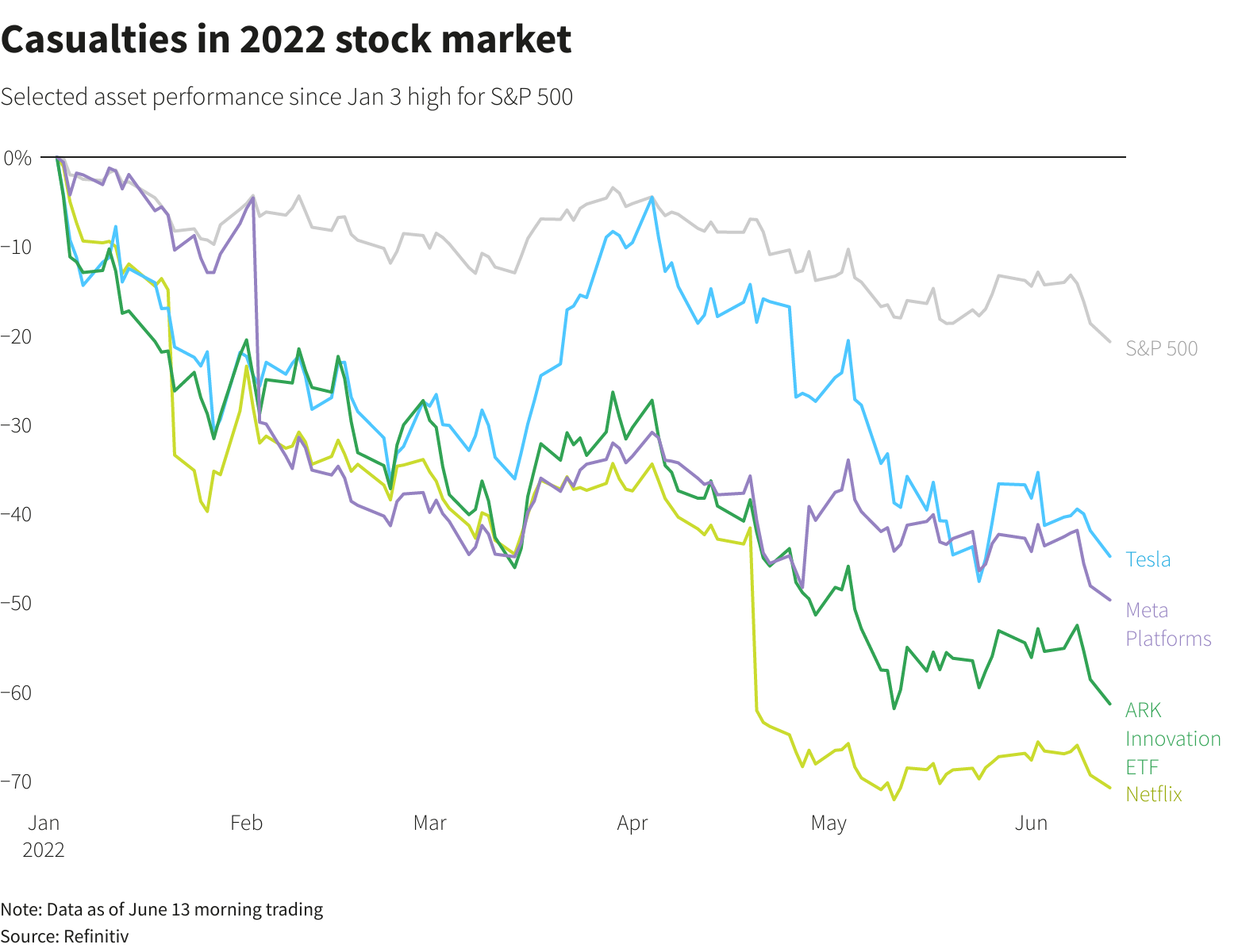 Investors have looked at various metrics to determine when markets will turn higher, including the Cboe Volatility Index, also known as Wall Street’s fear gauge. While the index is elevated compared to its long-term median, it is still below levels reached in previous major sell-offs.

ESRT vs. EGP: Which Stock Should Value Investors Buy Now?