The benchmark S&P 500 is down over 12% so far this year after posting its biggest monthly drop in April since the start of the pandemic. Meanwhile, the yield on the U.S. Treasury note hit 3% for the first time in over three years on Monday, doubling since the end of 2021.

The higher yields on U.S. government debt, which is viewed as virtually risk free, mean “you probably are starting to lose some of those folks who had maybe crowded into dividend-paying stocks and were maybe having to take a little bit more risk for that income,” said Sameer Samana, senior global market strategist at Wells Fargo Investment Institute.

“The implication for equities is you start to lose demand for stocks relative to fixed income,” Samana said.

Some investors are clearly very gloomy. Paul Tudor Jones, founder and chief investment officer of Tudor Investment Corp, told on Tuesday that he couldn’t think of a “worse environment than where we are right now for financial assets.”

In another weight on stocks, yields on the 10-year Treasury Inflation-Protected Securities (TIPS) – also known as real yields because they subtract projected inflation from the nominal yield on Treasury securities – have pushed solidly into positive territory after being in negative territory since March 2020.

Negative real yields have meant that an investor would have lost money on an annualized basis when buying a 10-year Treasury note, adjusted for inflation, a dynamic that has helped divert money from U.S. government bonds and into stocks and other risky assets.

Real U.S. yields on the rise 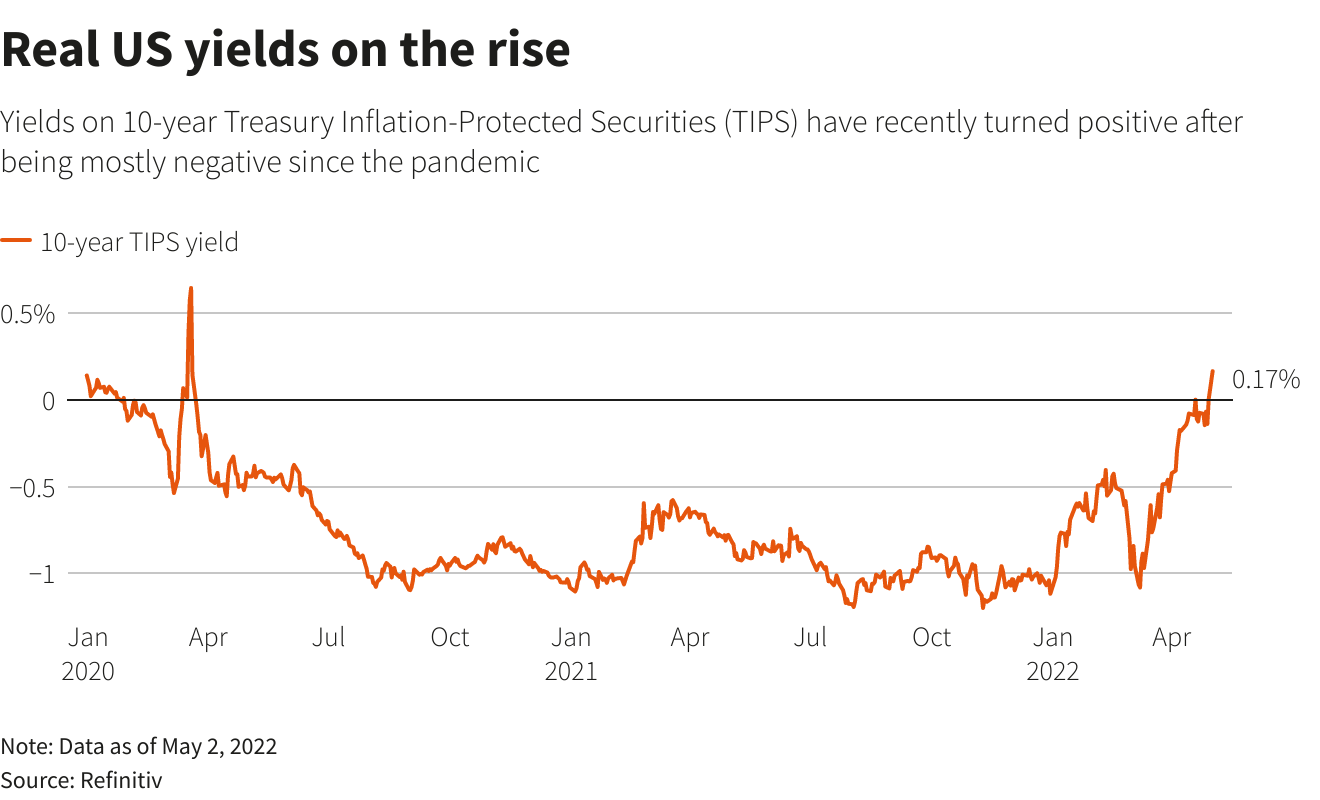 The Cboe volatility index, known as Wall Street’s “fear gauge,” has climbed from 20 just a couple weeks ago to over 36 on Monday, and finished just shy of 30 on Tuesday. An elevated VIX reflects increased investor expectations for choppy markets in the near term.

Amid the market’s slide, stock investors have reached new levels of pessimism. Bearish sentiment, which are expectations that stock prices will fall over the next six months, rose sharply to 59.4% in the latest survey by the American Association of Individual Investors. The last time bearish sentiment went above that level was in March 2009 during the financial crisis.

Bears on the prowl 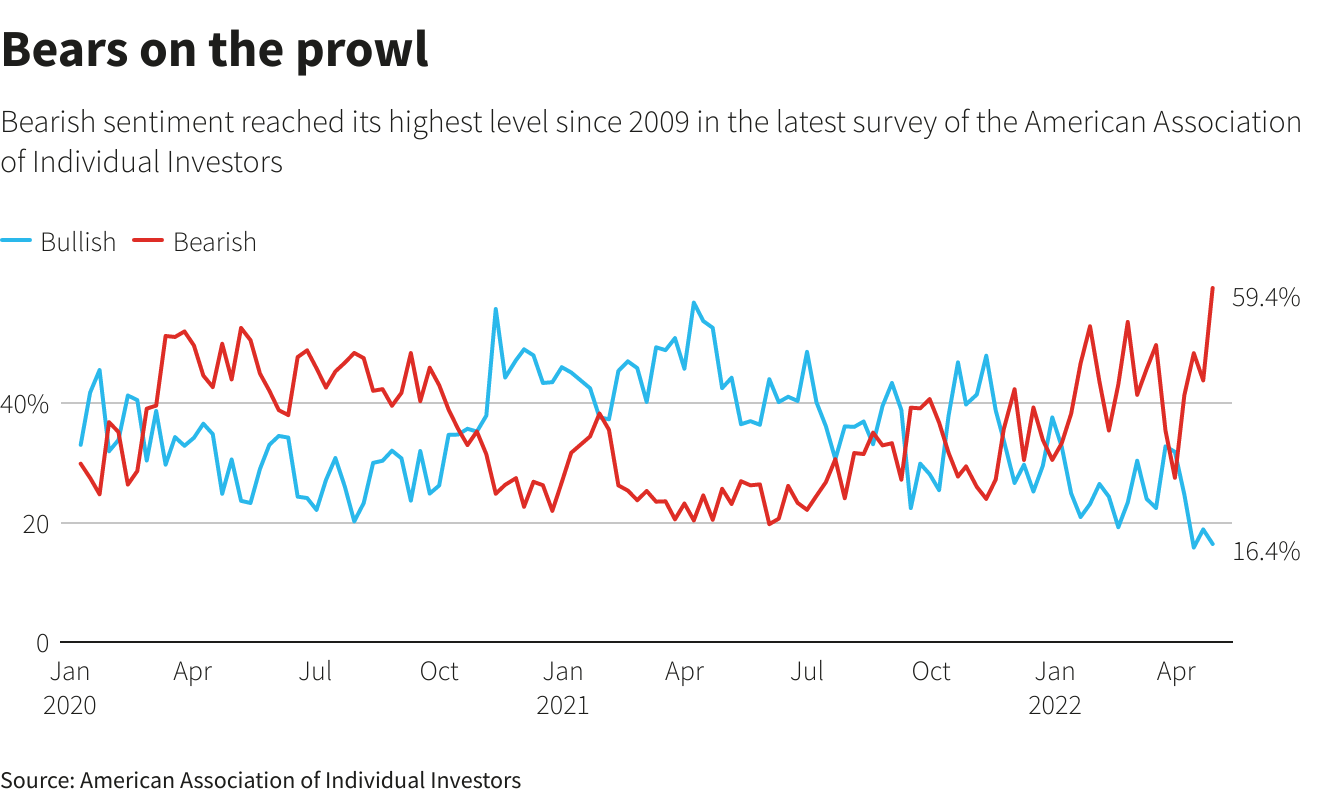 Such weak sentiment can be a contrary positive indicator for stocks. The net spread in the AAII survey between bulls and bears fell to negative 43 percentage points in the latest survey, with a four-week average of negative 29 percentage points.

Since 1987, when such an average four-week spread has been below negative 10 percentage points, the S&P 500 has risen 15.5% on average over the next 12 months, according to RBC Capital Markets.

How stocks do when investors are bearish 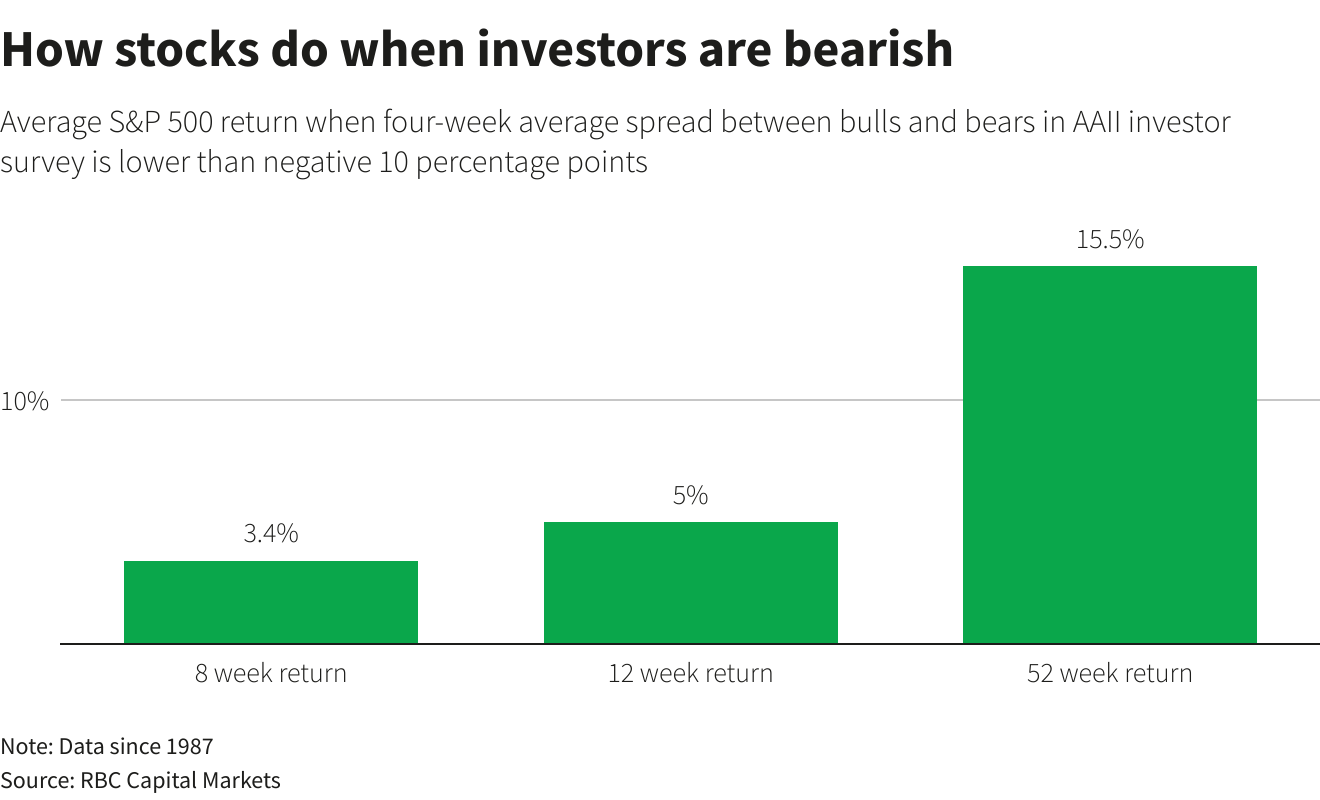 Indeed, some investors say the stock market could be set up for a short-term rally, should nothing from Wednesday’s Fed meeting catch them off guard. Following the Fed’s last meeting in March, the S&P 500 rallied 8% in the two weeks after the central bank raised rates by 25 basis points, as expected.

Traders in the options market remain cautious, with some measures of sentiment, including the put-to-call ratio of open contracts on the SPDR S&P 500 ETF close to the most bearish they have been in recent years, according to Trade Alert data. Excessive bearish positioning can help drive sharp rallies if sentiment reverses abruptly.

“The sentiment is really bad… Everything is starting to line up to be very oversold and overdone in the short term,” said Walter Todd, chief investment officer at Greenwood Capital in South Carolina. “Assuming you don’t get a big hawkish surprise out of the Fed, you could see a rally.”

Euro Stoxx 50 opening this May 4