International Business Times
Sales of new U.S. single-family homes tumbled to a two-year low in April, likely as higher mortgage rates and record prices squeezed first-time buyers and those in search of entry-level properties out of the housing market.

The fourth straight monthly decline in sales reported by the Commerce Department on Tuesday added to data last week showing a plunge in single-family building permits in April and continued weakness in sales of previously owned homes in suggesting that demand for housing was cooling.

But the housing market slowdown is likely to be limited by record low inventory. It is the segment of the economy most sensitive to interest rates. The Federal Reserve is raising borrowing costs to dampen domestic demand and tame inflation.

“Activity in the housing market has cooled significantly in recent months along with the recent jump in mortgage rates,” said Daniel Silver, an economist at JPMorgan in New York. “While higher rates likely have been weighing on sales, limits in available inventory and high house prices also may be restraining activity.” 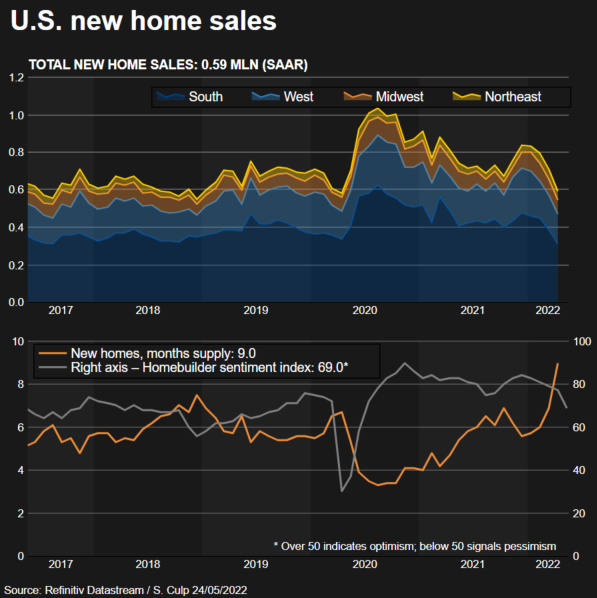 Though volatile on a month-on-month basis, new home sales are a leading indicator for the housing market as they are counted at the signing of a contract.

Stocks on Wall Street were lower. The dollar slipped against a basket of currencies. U.S. Treasury prices rose.

The 30-year fixed-rate mortgage jumped above 5% in April for the first time since February 2011, according to data from mortgage finance agency Freddie Mac. It has surged, averaging 5.25% in the week ending May 19.

The Fed has hiked its policy interest rate by 75 basis points since March. The U.S. central bank is expected to raise that rate by half a percentage point at each of its next policy meetings in June and July.

Though the softening housing market could weigh on economic growth this quarter, economists were not ringing alarm bells.

“The housing market is now back to pre-pandemic levels, so this massive hit in April should not be construed as the popping of a bubble,” said Jeffrey Roach, chief economist at LPL Financial in Charlotte, North Carolina.

The moderation in sales gains could allow supply to increase and slow double-digit price growth. The median new house price in April soared 19.6% from a year ago to a record $450,600. The average house price surged at a much faster 31.2% to $570,300, which suggested stronger price gains on lower-end homes.

“Combine that with a significant increase in financing costs and increased price sensitivity in the starter home market and it appears builders passing through costs was a significant factor in the sales drop, perhaps as significant as the mortgage rate increase,” said Chris Low, chief economist at FHN Financial in New York.

Virtually all the houses sold last month were above the $200,000 price level. There were 444,000 new homes on the market at the end of April, up from 410,000 units in March. Houses under construction made up roughly 65% of the inventory, with homes yet to be built accounting for about 27%.

The backlog of homes approved for construction but yet to be started is at an all-time high as builders struggle with shortages and higher prices for inputs like lumber for framing, as well as cabinets, garage doors, countertops and appliances.

At April’s sales pace it would take 9.0 months to clear the supply of houses on the market, up from 6.9 months in March.

Slowing activity was also evident in a survey from S&P Global on Tuesday showing its flash U.S. Composite PMI Output Index, which tracks the manufacturing and services sectors, fell to a reading of 53.8 in May from 56.0 in April.

The slowest growth pace in four months was attributed to “elevated inflationary pressures, a further deterioration in supplier delivery times and weaker demand growth.” A reading above 50 indicates expansion in the private sector.

“It is likely still too soon to tell if recent declines simply reflect a return to pre-pandemic patterns or a possibly deeper slowing,” said Veronica Clark, an economist at Citigroup in New York.