CE Noticias Financieras (Latin America)
Market recovery and the conflict in Ukraine boosted the stock market price of energy multinationals operating in Mexico by up to 25 percent.In the first quarter of the year, the market value of Chevron, one of the world’s leading energy companies with operations in Mexico, increased by almost US$82.5 billion.

The price of the American company’s shares soared almost 35 percent between the beginning of the year and the end of the third quarter, according to Investing data.

Like Chevron, others such as Valero Energy and ExxonMobile saw the value of their shares rise up to 25 percent in recent weeks, with stock market gains of nine thousand 228.2 and 71 thousand 120.7 million dollars, respectively.

These companies, like many others in the hydrocarbon sector, were mainly benefited by two factors: the market’s recovery after the pandemic, which increased the demand for fuels, and the invasion of Russian troops in Ukraine, which increased the feeling of risk due to a possible cut in the supply of oil from Russia, the second largest oil producer in the world, said Ramses Pech, an analyst of the energy sector.

The specialist recalled that although the business of these companies is the extraction and commercialization of crude oil, some of them, such as Chevron and Shell, have refineries and gas station franchises in countries such as Mexico, which has been attractive in the eyes of investors.

The stock market value of these companies has kept pace with international benchmark oil prices: West Texas Intermediate (WTI) and North Sea Brent, which in three months have risen more than 30 percent to over 100 dollars. 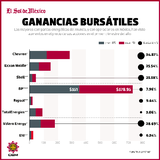 The war in Ukraine is the factor that has had the greatest impact on crude oil prices. At the end of last week, WTI and Brent fell due to the possibility of reaching a diplomatic agreement between Russia and Ukraine during talks between diplomats from both countries.

An increase in the global oil supply after the announcement by the United States and other countries of the massive release of strategic reserves, together with confinements in China due to the increase of Covid-19 cases and the possibility that the demand for fuels may decrease, have also had an impact on the drop in crude oil prices, but specialists such as Alejandro Montufar, CEO of the consulting firm PetroIntelligence, warn that this drop will not be considerable.

According to the analyst, some companies have gained stock market value based on their market share and operations. Companies such as ENI or TotalEnergies, which also operate in Mexico, had more modest increases in the value of their shares.

The Mexican state-owned company has been no exception. In February alone, the value of its exports grew by almost 14 percent with respect to the previous month and 38.6 percent at an annual rate.

The price of the Mexican export mix has remained at around 100 dollars, which will be beneficial for the company, said Montufar.

Pemex is not listed on the stock exchange, like private equity companies, but by issuing debt it must publish its quarterly reports on the Mexican Stock Exchange, where it will disclose the benefit that global geopolitical movements brought to the national oil company in the first months of 2022.